I had the pleasure of watching Jackie Blanc in action yesterday at Lincoln Brick Park, and she had me and the rest of the 5th graders from Westwood Elementary School in Portland on the edges of our "seats" (as if "sitting" is something ABNL kids do... ;).

First of all, a little about Jackie: Jackie wears a ton of hats for Eaton County Parks, and I'm pretty sure she's the only interpretive naturalist for the county. She's been working with ABNL for 12+ years and has created all kinds of lessons that get kids to think deeply and explore real-world questions that nature presents. She's got this personality that's both understated and down to earth, but also hilarious and deeply "geeky" about the natural world. All week, the kids have been totally lit up about nature stuff: using the GPS, taking water samples, finding shapes and sounds in nature, and, the lesson she calls CSI: Nature Investigation. 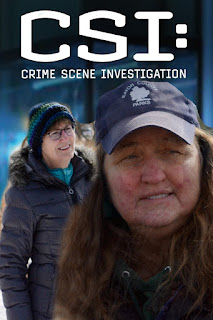 To start, Jackie takes the Westwood crew, headed by first-time Annie's teacher Teri Keusch, outside and explains that there was a board meeting last night at Lincoln Brick Park, in which some concerns were raised about the prescribed burning that they'd been practicing at the park. (Prescribed -or controlled- burning is a wildfire set intentionally for purposes of forest preservation, prairie restoration, or to reduce greenhouse gasses. Read more about this here.) There was one tree, in particular, that the board was concerned about -- they believed that it had been killed by the burning. Jackie was hoping the students could help her prepare a report for the board by checking the tree out, gathering some evidence, and writing up their findings. While they were at it, she said, there were a couple of other "crime scenes" she needed some insight on. 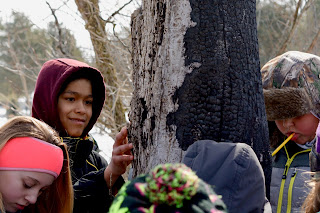 Then, a discussion ensued where she asked higher order thinking kinds of questions: "What do you notice?" "What patterns do you see?" "How does ____ relate to ____?" and (one of my favorites), "What makes you say that?" Eventually, students determined together that the tree had died before the controlled burn. When Jackie asked what she should do, one student suggested, "You should teach the Fire Marshall about some stuff." Indeed!

One of the trees the Boy Scouts had planted had been badly abused by something, and Jackie wanted to know what happened. 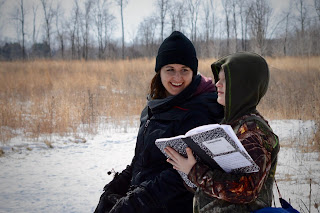 Once again, students began by writing down their observations, looking for clues, and once again, they discussed what could have happened. Students thought that maybe a deer had rubbed its antlers on the tree as a way to shed its velvet and mark its territory.

It really is amazing to hear what students know when you ask the right questions. Observing that the Jackie's antlers were broken off at the top, one student noticed small bite marks and reported to his classmates that mice and other small animals will often eat the bone as a way of getting calcium. As we like to say in my family, You could learn something new every day if you're not careful. 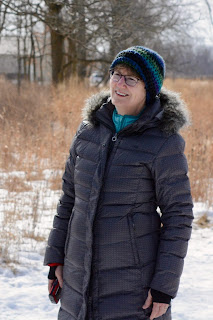 As students tromped to the next crime scene, I overhead one student exclaim, "We're just blowing through these cases! This tree? Solved! That scene? Solved! My dad's a detective...he told me to look for the clues."

The next case was a "cold case": Jackie had found an animal that had been dead for awhile and wanted to know what might have happened: once again, students were collecting the clues, making connections and comparisons, looking for patterns, and being true crime scene investigators. 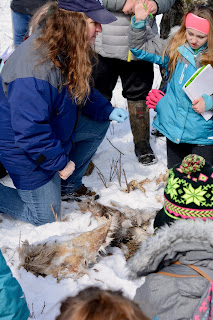 Jackie pokes around the dead deer's hide, skull, and skeleton for clues. 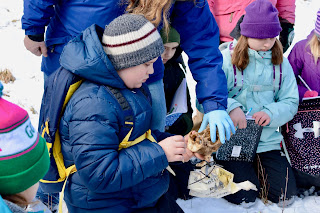 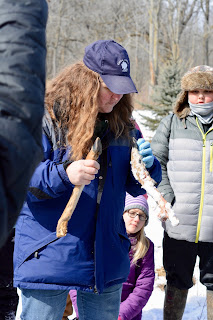 Jackie finds a leg on the ground and says, "See this leg? It's not even connected to anything!" Then pulls another leg from her backpack and compares the two.

By the end of the lesson, kids were a-twitter about the clues they were finding, and what it could all mean. They were thinking deeply and critically, exploring real-world questions, and having a ball doing it. Another day at Annie's BIG Nature Lesson in the books.


Posted by Annie's BIG Nature Lesson at 11:36 AM No comments: